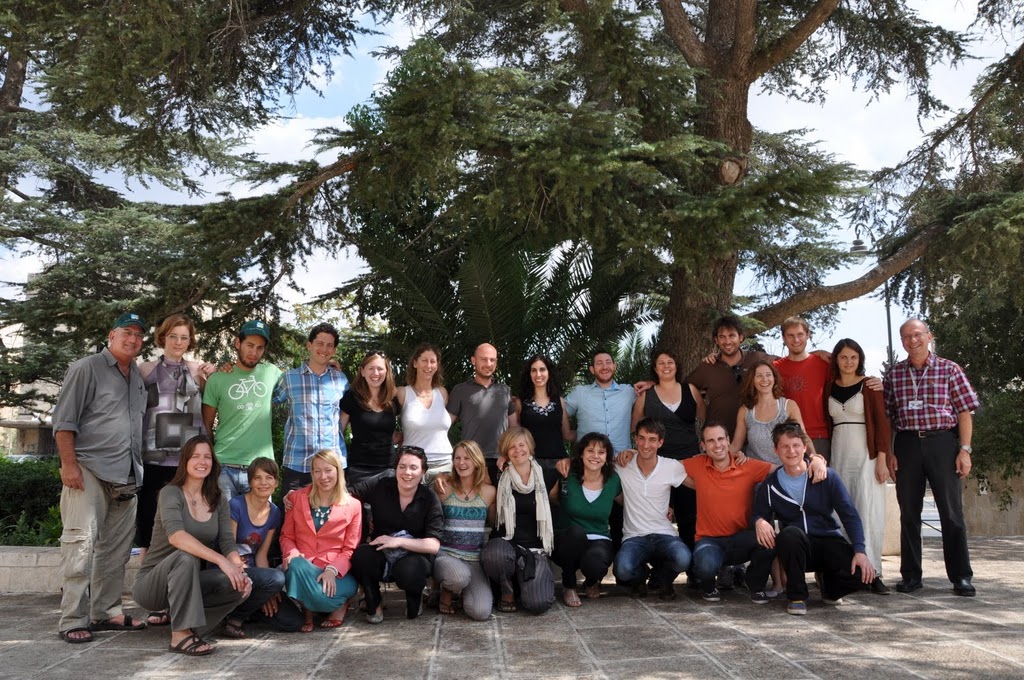 Inga, greenXchange participant, describes her impressions of the seminar in Israel 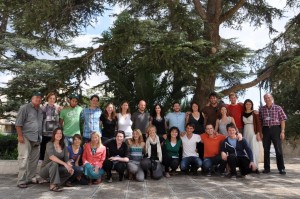 The participants further saw how freshwater resources can be obtained when they visited the biofilter projects in Kfar Saba. Following precipitation events water will be transferred to collecting tanks. Biofilters clean the water and transfer it to the groundwater. The need for energy is minor. All seminar participants appreciated the ecological sustainability of the biofilter system as well as the integration of the biofilter system in the urban city planning in Kfar Saba.

Water desalination provides another option to address the need of water resources in Israel. By using a reverse osmosis, freshwater will be gained from seawater. Desalinated water is widely used for the irrigation of cultivated crops. However the process of desalination needs high amounts of energy and its environmental sustainability was questioned by the German and Israeli seminar participants.

Visiting the Yatir Forest planted by the KKL in the Negev desert, the participants realized that also the natural vegetation suffers from the climate change that comes along with less but more intensive rainfall events. As a consequence, soil erosion is in progress. Afforestation helps to control the overland flow and to limit the progress of soil erosion. But afforestation in an area which suffers from less 280mm of precipitation is a challenge, said Itzik Moshe – Deputy Manager of KKL – who is responsible for the south of Israel.

Especially serious droughts in recent years have damaged the forest. Now they are going to reduce the tree density in order to limit the competition for water resources. Due to support by JNF-KKL Germany, the Yatir Forest is being supplemented by a water reservoir that controls overland flow and stores water resources. Additionally the cooperation with Bedouins is essential to protect the forest. Grazing by sheep and goats is essential to prevent forest fires, said the manager of the Yatir Forest. Grazing reduces an accumulation of dry understory biomass that might enlighten the trees. By means of cooperation with the local Bedouins the former degraded soil was regenerated.

Students from Israel, the Palestinian Territories and Jordan talked about their studies on the threshold between traditional Bedouin life, settlements, afforestation and the protection of the natural vegetation in the Negev desert. Regarding afforestation, a critical issue is provided by the fact that pine trees in the Negev do not regenerate themselves. Research about other tree species and tree density is in progress to prevent soil erosion and maintain resources in the area of the Yatir Forest.

The environmental education programm in Kibbutz Lotan provided a further part of the seminar program. Young people get a chance to volunteer in the construction of low energy houses. Living in these houses, reduces the amount of energy up to 70%. The seminar participants additionally tested the functioning of solar ovens. The KKL has supported the ecological community of Kibbutz Lotan since their foundation. Projects under supervision of Kibbutz Lotan are bird conservation areas, waste water treatment and recycling, solar technologies, an environmental education center and ecotourism projects. All participants enjoyed the hospitality of Kibbutz Lotan.

Even the participants from Israel were quite impressed due to the large number of environmental projects supported by KKL in Israel. For the Germans it was an interesting experience to have their perspective about Israel changed during the seminar. For many people in Germany, Israel is mainly a place of political conflict. Also most tourists only get insights into historical and religious subjects. Getting in touch with the Israeli environment was a unique experience.

All greenXchange participants are now very much looking forward to the follow-up seminar in Germany in August 2012.

On September 25, the Israeli-German greenXchange mission concluded its week-long ecological tour of Israel at the KKL-JNF offices in Jerusalem.  The group met with senior KKL-JNF officers and discussed future directions in environmental issues. The group was comprised of ten German and ten Israeli professionals from a variety of environmental fields. The mission spent a week touring KKL-JNF ecological projects taking place in Israel’s southern and central regions.

The meeting was opened by Avi Dickstein, KKL-JNF Executive Director of Resources and Development.

“David Ben Gurion, Israel’s first prime minister, said that in Israel, in order to be a realist, you have to believe in miracles,” Dickstein said. “We feel that we are implementing his vision at KKL-JNF. We carry out over 400 projects every year, and our friends in Germany are an important part of our team. I once heard that the word TEAM stands for Together Everyone Achieves More, and that very much expresses our philosophy in regards to our strong connection with our friends throughout the world. We look forward to working together with you in the future. In the words of Peter Drucker, ‘the best way to predict the future is to create it.'”

Dr. Omri Boneh, director of KKL-JNF’s Northern Region, spoke about KKL-JNF’s mission in the past and compared it with the organization’s current mission: “In the beginning, one of our goals was to green the landscape,” he said. “Today, our focus is more on ecological restoration, including the prevention of desertification, fighting global warming, increasing biodiversity through water harvesting, and much more.

“In terms of forest ecology, we began with the classical approach, which favors a dense plantation policy, and that meant planting conifers. Today, we encourage natural processes and try to create an environment in which natural species can develop. This is a more difficult task, because indigenous species grow slowly and can be damaged by grazing and other factors. Annual precipitation is below average due to global warming, so we need to reduce tree density, in order to grow healthier and stronger trees that can resist droughts.

“We are also very involved in restoring Israel’s streams and rivers, many of which dried up because the water was channeled to pipes for residential use. KKL-JNF and the Ministry of the Environment decided to rehabilitate the streams, and we have achieved excellent results at places like the Yarkon River, which you visited.

“I would also like to mention our international program. We are very interested in sharing our knowledge and expertise with countries throughout the world. For example, eucalyptus forests are very important for the lumber industry, and we have had success with biological control of pests that damage or even kill eucalyptus trees. Encroaching deserts are a problem for many countries, and the techniques that we have developed in the Negev have proved themselves helpful in other localities.”

The presentations were well-received, and the group was full of questions. “How does KKL-JNF choose its projects? Are their collaborations between KKL-JNF and other institutions?” one participant asked of Avi Dickstein. “Our first priority is to meet the needs of the Galilee, the Negev and Jerusalem,” he responded. “We then prioritize the needs of each region. We work a lot with local and regional councils and other governmental and green organizations. We often find sources to match funds that we provide. We also try to help communities with low socio-economic status.”

Mr. Grisha Airol-Arioser, director of the German-Israeli Business Association, described the business ties between Israel and Germany: “In terms of economics, Germany is Israel’s third strongest trading partner in goods and services. I believe that there is a lot of room for cooperation in the field of energy efficiency, in terms of developing more efficient vehicles, buildings, finding ways to use less electricity, and so on. It also has to do with materials, technology and education. KKL-JNF does a lot in these areas.

“Israel and Germany work well together, because each has something that the other lacks. It is important for us to identify common goals and challenges. Our common denominator is to make the world a better place for our children. We need young people in order to make these things happen, and it is people like yourselves who help guarantee constructive future relationships.”

Dr. Schaul Chorev, outgoing KKL-JNF emissary to Germany and one of the main facilitators of greenXchange, thanked everyone for helping to make the mission so successful. When he mentioned Yehudit Perl-Strasser, KKL-JNF’s director of its Young Leadership program, one of the group members said that “although we had different opinions about almost everything we discussed, we all agree that we want to permanently adopt Yehudit.”

The greenXchange mission was made possible thanks to the generous support of ISTRATradeLinkLtd. Dr. Chorev presented a certificate of appreciation to company representative Mr. Guido Guth.

Mr. Guth told the audience that ISTRATrade is a Swiss company that promotes ecological collaborations. “We wanted to do something in memory of Steven Karger, who helped establish the company and died at the young age of 49,” he said. “He believed in education and ecology. I spoke with Grisha, who recommended the greenXchange program, which we felt was the perfect way of honoring his memory.”

The meeting concluded with presentations by both Israeli and German participants on the group’s future plans. The group plan to stay in touch through biweekly Skype video conference calls and an internet forum. The group aims to develop a central project, and they will work to empower German and Israeli environmental experts, and promote joint study and information exchange.  Another goal is the facilitation and implementation of business initiatives, cutting edge research, and hands-on projects. A follow-up seminar will be held in Germany in about a year’s time, and a framework will be created for annual seminars and attracting new members.

The group will identify KKL-JNF projects to support and will research ways to enhance their sustainability. Possible areas of focus include energy, agriculture, urban planning, economics, cooperation with German NGOs, and volunteering. The group will also invest in fundraising and communications, including identifying donors, producing a brochure and publishing press releases

Yehudit concluded the meeting and summed up the trip: “I am overwhelmed by your presentations and the way you were able to put it together so quickly. Now I have to review everything and start working on the next seminar. I loved the dialogue that went on and I feel that the most important thing is to listen to each other and to want to make something happen. I hope that seeing some of what goes on behind the scenes at KKL-JNF has planted the seed of love for Israel in everyone’s hearts. See you all soon!”